The DPS weekly round-up of all the great blog posts you might have missed.

1) What , exactly, does being a “traditional” Southern Baptist mean? This article may be of some help answering that…plus there is a bonus video at the end that’s good for a few laughs.

2) Catholicism vs. true christianity is a subject I’ve been harping on since the election of the new pope, or before, this article explores that same topic a little further.

3) Another topic that has been on my mind lately is money, specifically tithe, this post by Average Us looks at that issue a little closer.

4) With all the events unfolding in Boston last week, this article by Past and Present blog reminds us of the place suffering has in Christianity.

5) Speaking of the events unfolding in Boston…it is being reported that the two brothers who did this were involved with a “radical” Islamic sect…”radical”? Here is what Muslims are taught regarding how to “deal” with non-Muslims…were they being “radical” or devout? Answer…they were being devout.

6) If you are down does that make you a bad Christian? Here is some help answering that from Sinclair Ferguson.

Today’s faith-strengthening trials one day will “be found to result in praise & glory & honor at the revelation of Jesus Christ.”1 Pet 1:6-7

VIDEO OF THE WEEK

Note: I posted this because it seems to me that Penn Jillette is a very intelligent man who understands something very fundamental about Christianity that most people who call themselves “Christian” do not get. see if you can tell what it is. And also…pray for him. 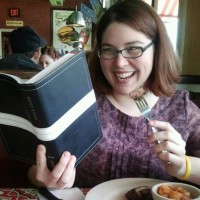 Women by the grace of God, for the glory of God

A Twisted Crown of Thorns ®